The RBA’s interest rate cuts don’t seem to be working – What next?

So, the RBA is concerned that the economy is on tenterhooks and could go one way or the other. Contrary to some commentators, the RBA generally won’t like to see a downturn or a recession – the same way that it doesn’t like to see a boom.

To help the economy from sliding into a downturn, and to improve its growth rate, the RBA has cut the official cash rate to 0.75%, and has given its strongest indication yet that it might go to 0%. Australia has never even been close to a 0% interest rate before. At the start of June, the official cash interest rate was 1.5%. This is what the interest rate chart over the last few years looks like: 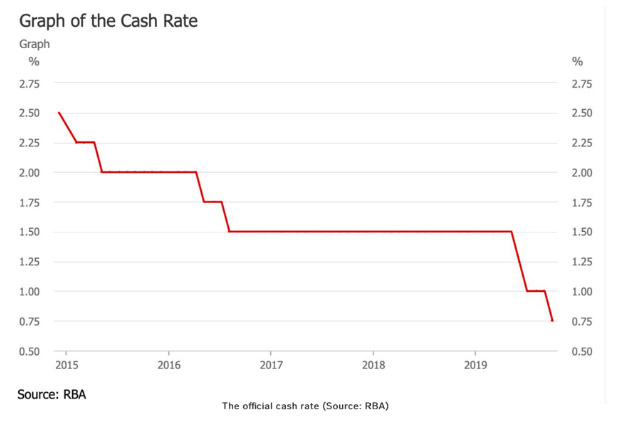 Before this year (2019), the cash rate had never strayed below 1.5%, meaning the RBA is entering unchartered territory in doing so. The RBA Governor has signalled it doesn’t want to cut rates, but without the government increasing its spending it has no other choice to try to stimulate the economy:

“Quite simply, the economy requires more stimulus. Ideally, the federal government would rise to the occasion. Fiscal policy can be better targeted in the current environment and could stimulate the economy without pushing house prices and debt higher.”

It’s also worth noting that the Prime Minister Scott Morrison has indicated a willingness to look at budget stimulus at the mid-year budget review in December. Dropping interest rates can only do so much to stimulate the economy. So, it’s not a case of either stimulus or surplus.

What Should Interest Rates Do?

When interest rates are cut, in theory, money is cheaper. The banks are often expected – but not required – to pass on the changes to you, their customers. This affects you in two major ways:

How are Interest Rates that Financiers Charge Worked Out?

The lack of transparency and understanding on what drives interest rates is a major issue. Interest rates charged by banks are made up of a number of moving parts, which include:

What Else is Going on?

As a result of the fallout of the GFC (yes, we are still dealing with those matters), and then the booming house prices from 2013/14 in Sydney and Melbourne (which were not experienced in Perth or Darwin), the then Government (which was a mix of Rudd/Gillard, and then Abbott/Turnbull) decided to win political points by leaving interest rates low, but getting the regulators to tighten-up things within the lending rules.

This was done so that interest rates didn’t need to be put up back in 2012/13 in order to win elections. In the background to cool off a heating market, the regulators went about making the banks increase rates by changing the rules.

Fast forward to today, and the Regulators now have more power than ever before. To provide some context, the major issue and concerns that we have with the two major regulators for banking, are:

The interest rate cuts have not worked, because the Government has a big roadblock sitting in the way. The roadblocks put up by APRA and ASIC, and the changing rules for borrowing money, have led to a lack of the ability to lend by financiers.

More lending and activity are required to stimulate the economy and the property market. The interest rate cuts have been ineffective, and only encouraged more saving and not spending, as borrowers are finding it difficult to lend money.

Our finance broking team, AustAsia Finance Brokers, has reported that approximately 50% of all of AAG clients who qualified for a loan 2 years ago would not qualify for a loan now.

A few recent examples have been property developers and builders – the banks see that as too high risk. Then, a lack of sales and ability for people to borrow means lower demand for property. A number of sales of properties of late have been people that have to sell due to financial stress. So, that only creates lower prices, which means a downward spiral effect.

For more information, check out this link.