The RBA’s interest rate cuts don’t seem to be working – What next?

There is a lot of talk around Interest Rates in the media, on TV and everywhere at the moment. We have recently seen the Government announce that the consumer protection regulator, the Australian Competition and Consumer Commission (“ACCC”), will conduct an investigation of the banks and why they aren’t passing on interest rate cuts in full.

We are waiting now with great anticipation as the annual Melbourne Cup Reserve Bank Board Meeting will occur on the first Tuesday of November for ‘the race that stops the nation’. Usually, the interest rate decision is a blip on the day, as everyone is in the mood of the Spring Carnival Racing, and forgets about the interest rate decision until the hangover kicks in a few days later.

In getting ready for the interest rate decision and the race, we thought we would help with more information around what is happening now.

There are so many mixed messages coming from the media and Government, so, we thought it would be timely to decipher what is actually going on, and in our view, what the Government needs to be concentrating on to improve things economically.

Interest rates are used as a way to either stimulate or taper down economic activity. Traditionally, it has been very effective, as economic theory of supply and demand has kicked in. That is, make things cheaper, and it will stimulate demand – lower interest rates mean more people wanting to borrow money.

This is why they are often used by Governments around the world to assist in stimulating economies and to fuel economic growth where needed.

In more recent times in various countries, including Japan and Europe, interest rate cuts have not worked, and so other measures have had to be considered.

Where are we Now?

This is the current state of play provided by the Reserve Bank of Australia (“RBA”): 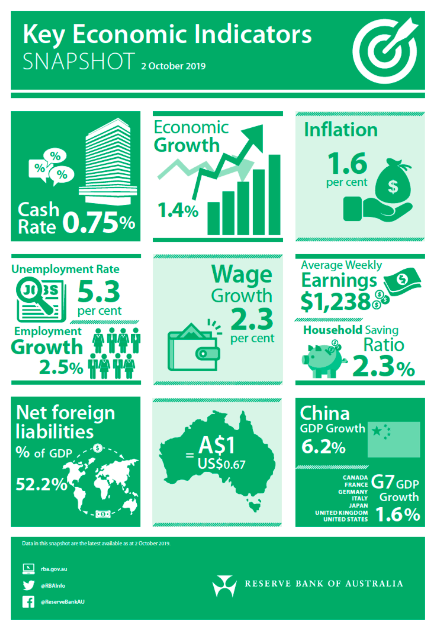