How Many Kingdoms? A Brief Run Down of the Geopolitical Landscape.

The world has always been challenged by geopolitics. The nature and magnitude of associated conflicts may transition and manifest across varying contexts but, broadly speaking, geopolitical risk is always present.

The rise of widespread geopolitical issues comes at a time when the world economy is at risk of slowing. Consumer confidence and financial sentiment has dampened alongside the growing risks to the current economic expansion.

Central banks are treading cautiously, and are mindful of the already low-interest rates and the high levels of debt. As the IMF highlights, failure of nations to co-operatively address sources of dissatisfaction could further destabilise a slowing world economy.

There has been and will always be something going on in the geopolitical space and the media will ramp it up as best they can because when we are frightened, we tune in, when we are happy, we tune out.

Remember. Kim Jong who? Although he now wants some attention too.

The trade war between the US and China, characterised by tit-for-tat tariffs, continues to disrupt major global supply chains while threatening to hinder global economic growth, albeit the extent to which is unknown.

While the impact of the trade war has affected the financial markets, primarily through its effect on business and investor sentiment, more broadly there could be opportunities for some nations to benefit from a potential diversion of trade, particularly for economies that have the competitive capacity to replace US and Chinese firms. 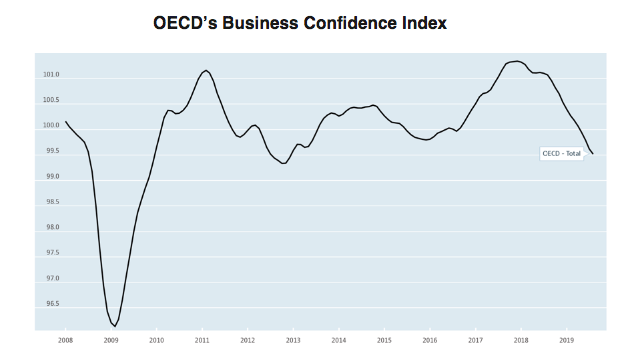 The open rivalry and strategic competition come as China makes progress towards achieving its major long-term goal of becoming a “moderately prosperous country” by 2020. As part of this strategy, China aims to become a “global innovation power in science and technology” along with other goals related to supporting the sustainability of its growth and its “Made In China” campaign.

Some of the actions China is alleged to have taken to achieve this, including allegations of the inappropriate transfer of intellectual property and technology, have raised concerns over national security for the US. This issue has been a driving force behind the protracted trade negotiations between the two countries.

Trump’s August announcement that the US would impose 10% tariffs on US$300 billion of Chinese goods sparked a slide in global equities. The Chinese government immediately responded by allowing the Yuan to break USD/CNY 7 mark, in a move that could be interpreted as retaliation.

Further recent measures by China to combat US tariffs through a devalued Yuan is not helping with the conflict.

The US trade deficit with China widened from US$30.1bn in June to US$30.2bn in July, a 5-month high. US exports to China are down 18.1% this year, while imports have fallen 12.2%, a reflection of diminishing trade both ways.

Let’s see what the next few days bring…

Recently proposed amendments to Hong Kong’s Fugitives Bill to allow extradition of fugitives not only to China, but to any jurisdiction in the world with which the territory has no existing formal agreement had led to protests in the streets of Hong Kong, over concerns and fears that the law could be abused by China for political or commercial reasons. Though the amendments have now been suspended, the unrest continues.

What began as a peaceful protest against these amendments to Hong Kong’s Fugitive Offenders Bill has now turned into the revival of a deeper-rooted issue reminiscent of the 2014 Umbrella Movement.

While it is an example of China’s assertion of power within its own borders, it is also a demonstration of a clash of political ideology.

The Hong Kong protests are disconcerting, as it is the financial hub of Asia, not to mention the most expensive real estate in the world. How it unfolds will affect the region and its financial markets, with a ripple effect globally.

The outcome of the UK exit from the European Union (EU) remains uncertain, following the resignation of Theresa May and rise of Boris Johnson as Prime Minister only months before the Brexit deadline.

Currently, the EU Single Market and Customs Union provide the deepest possible economic integration of a region and deviation from this standard involves economic costs. While this is occurring, some EU countries are still recovering from the crises of recent years.

The Northern Ireland hard border is a major issue.

The UK Supreme Court determining that PM Johnson’s suspension of parliament was unlawful adds another episode to the Brexit comedy – a new delay is looking certain.

The Bank of England’s Financial Stability Report affirmed that UK Banks are deemed resilient enough to withstand a disorderly no-deal Brexit, but it is still expected that a range of UK assets will be negatively affected.

The bigger concern for most analysts at the moment is not the effect of Brexit on the UK, but rather the effect on Germany (in particular) and the rest of the EU. The UK’s position with the EU is similar to the US position with China – the UK is a major importer of the EU product, in the same way, that the US is a major importer of China’s product. You can draw your own similarities between the respective world leaders!

We can’t help but wonder if Brexit will be like to Y2K bug, where the world was going to end because computers couldn’t click over from 1999 to 2000, but… nothing happened, everything was fine. Whatever happens, the UK will go on, so will the EU and everything will be OK (eventually).

And for some Home-Grown Politics

Scott Morrison has announced a “comprehensive audit” of international organisations that Australia has a significant role in, such as the United Nations, World Trade Organisation and the International Monetary Fund. “We should avoid any reflex towards negative globalism that coercively seeks to impose a mandate from an often-ill-defined borderless global community. And worse still, an unaccountable internationalist bureaucracy,” he said.

We would encourage all clients if possible to write to their local member of Parliament and ask for answers on the power of the regulators to do economic damage, and in particular why ASIC is wasting taxpayer dollars on pursuing Westpac on a test case for a frivolous exercise, which has had major damage to our economic growth in Australia. The attitude of APRA to its results of curbing investment and interest-only loans leaves a lot to be desired as well.

This publication has been prepared by AustAsia Group, including AustAsia Financial Planning Pty Ltd (AFSL License No 229454).