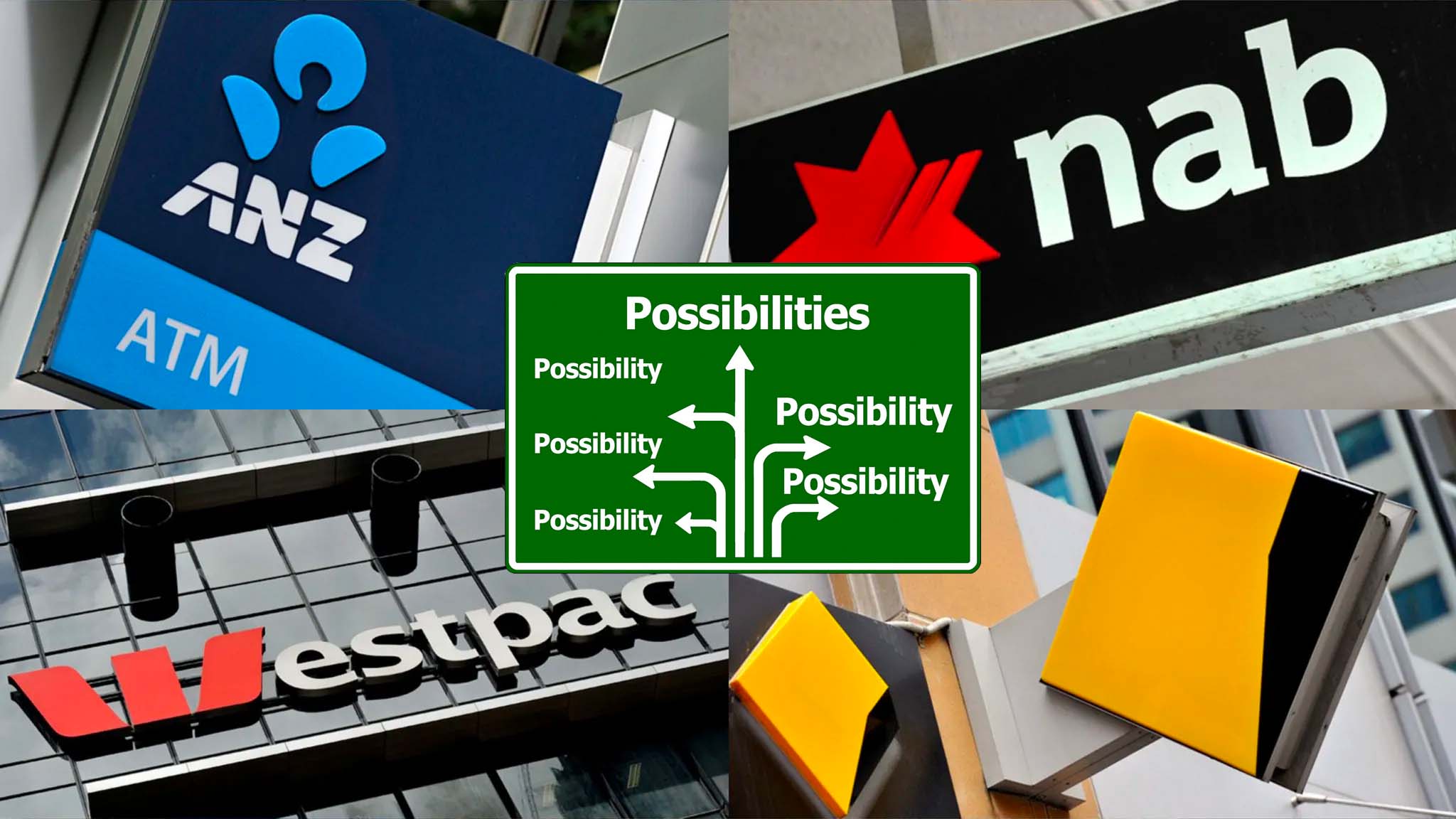 Can you bank on the Big Four Banks? Part 2 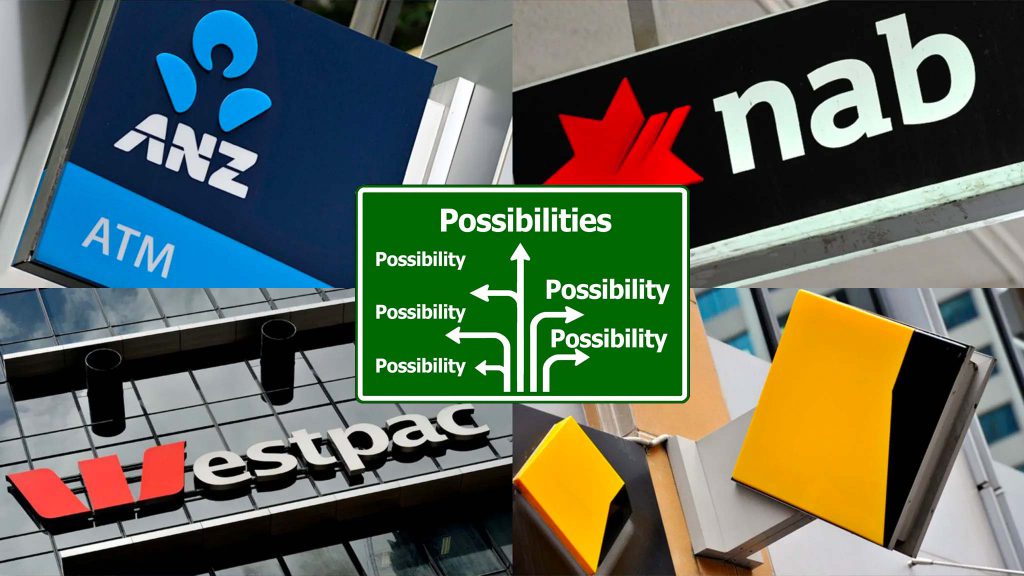 Welcome to Part II. The chaos from COVID has thrown up plenty of opportunities, none more so than the banking sector.

Let’s kick off from where we left off, starting with the four points:

Whilst it is difficult to know precisely where the banks’ share prices will move in the short term, we are confident that over the medium term and beyond, they will be substantially higher due to the:

1. Investor need for yield;
2. Long-term track record of profitability and dividends;
3. Core nature of banking; and the
4. Competitive advantages and oligopolistic industry structure.

When the dust settles, investors will wake to the reality that the RBA has an official rate of 0.25% (and not looking to move up). This means that deposit rates will be ~1%, so after inflation (at 2% to 3%) and tax, investors will receive a negative return of 1% (at best) – that is, 1% interest received less 2% inflation = -1%.

Many analysts concur that, under this scenario, there will be an inevitable migration out of cash back into equities, in particular those with an above-average and ‘sustainable’ dividend yield. Reluctant at first, inevitable in the end.

It is clearly harder to hide bank margin in record low rates. With the official rate at 0.25% and mortgage rates now testing the 2% barrier, the NIM has never been tighter. This is clearly a significant headwind (which is the financial term for an impediment). And with deposit rates on many accounts already at 0% (or negative when account fees are included), there is no scope to reduce them any further to increase the profit margin (in banking terms called the spread).

Put simply, Net Interest Margin (NIM) is the difference between what a bank receives from credit products like loans and mortgages, and outgoing interest it pays for term deposits and other savings products. So if a bank is paying 1% for a term deposit and lends that out as a mortgage at 3%, then NMI is 3% less 1% = 2%. There’s a little more to it than this, but you get the idea.

To begin with, they have been reducing the impact on margin by withholding a component of some of the recent rate cuts.

Of course, the shorter-term impact is of more immediate concern to investors. And once again, we believe that record low interest rates should play a significant role in containing bad debts and provisioning.

“Whilst some could intimate that bank yields are not sustainable, we would argue that it is in fact the lack of dividends that is unsustainable. Whilst the majority of the investing community appears to be fixated upon the current half-yearly dividend, a simple review over any other timeframe would provide a very different picture.”

For example, over the past 10 years, NAB has paid an average of $2.64 per annum including franking credits, Westpac $2.52 and ANZ $2.24. This has actually happened!

On the current share prices (not COVID lows), this equates to grossed up yields of 13.8%, 13.6% and 11.5% respectively. History clearly indicates that the present situation is the exception, not the norm.

Which leads us to the heart of this consistency…..

The core nature of banking

We agree with many market commentators that when the effects of COVID pass – as they inevitably will – the population will still need to borrow money. The whole spectrum of lending, from personal loans and mortgages, right through to large scale business financing, will still be required. Borrowing money is as essential to a capitalist economy as oxygen is to human existence. Banks provide a core function that is irreplaceable.

What about the new breed of disruptors, neo banks, impacting the banking system? If you take a look under the hood of the vast majority of these ‘innovators’, a significant percentage, if not all of their funding, originates with the major banks! This is not surprising, as the major banks can borrow money cheaper than anyone else in the country.

As a side note, many of the smaller non-bank lenders, and a range of other products get wholesale funds from the Big Four. For example, NAB gets some of its monies from superannuation funds, such as MLC, which are then invested in interest bearing investments.

Which leads us to the fourth reason for being positive on the medium-term outlook for the major banks:

Their competitive advantages and oligopolistic structure

In other words, their sustainable competitive advantages and barriers to entry.

It is very difficult for the smaller banks, such as Bendigo and Adelaide Bank, BOQ, and AMP to compete with the Big Four. And in case you were not aware, the Big Four actually own a number of the bigger brands that you know well:

Their sheer size enables them to borrow money – either through customer deposits or wholesale credit markets – at the lowest average cost. But in addition, the Big Four banks also enjoy the largest economies of scale, deepest IT spend, trusted (perhaps not loved) brands and extensive distribution footprints.

These are sizeable and significant barriers to entry, and go towards explaining why the Big Four have remained the four same banks for such a long period of time. Investors often go to great lengths to find monopolistic or oligopolistic industries, but in the banking sector it is in plain sight – but often missed.

In Australia, there are just over 50 banks, but less than 10 have any scale and the Big Four control around 60% of the market. In the UK there are over 300 banks. As outlined above, the economies of scale and oligopolistic structure of the Australian industry enables Australian banks to maintain higher levels of profitability.

Back to the ASX200 and the banking index

The disconnect between the ASX 200 and the financials index is at record levels.

Source IRESS: The ASX200 is the blue line, while the Banking Index is the red line.

Where does this leave us?

With the fundamentals… “the short term is unknowable, but the long term is inevitable”.

This means that in the short term, sentiment rules the roost, but over the long-term fundamentals drive share prices.

We need to remind ourselves that in a post-COVID world, our country will have the lowest interest rates on record.

The hunt for yield will be on in earnest. So we see no reason why the banks cannot regain their early 2020 prices over the next 18-24 months. This offers decent capital growth from current levels.

Even if dividends recover at the most conservative of estimates, the average yield is around 5% fully franked in FY21, moving to 7% fully franked thereafter.

While the outlook for the banks may look uncertain, Australia’s banks have historically performed well coming out of crises.