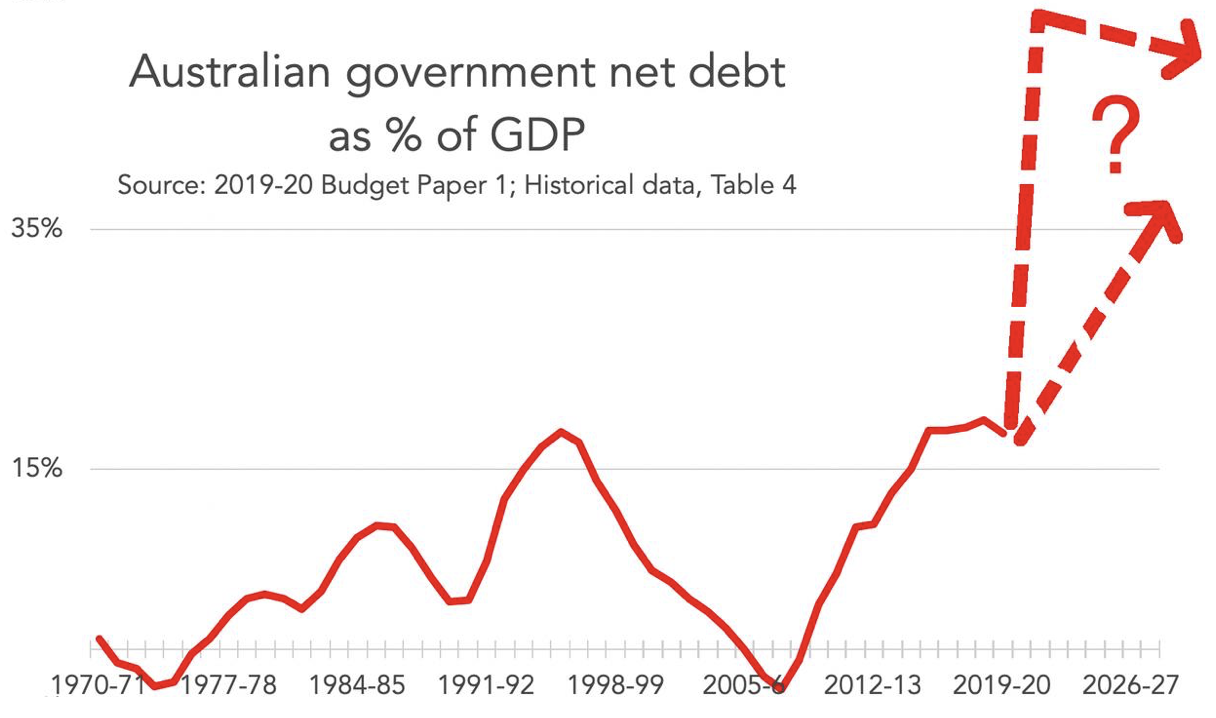 Government Debt – is it too high?

Home » News » Investments » Government Debt – is it too high?

How much Government Debt is too much? We’re not even close!

This is not a bad news story! Does that make it a good news story? Not quite, but all the Australian Government spending is designed to keep the current recession from being too sharp or going on too long.

But it has some people nervous, and the Media is trying to panic us, because that’s what they’re designed to do. So, are we spending too much?

The answer is no. We can afford this, and, if needed, we can even spend more.

Here’s the picture of debt as a percentage of GDP since 1900: 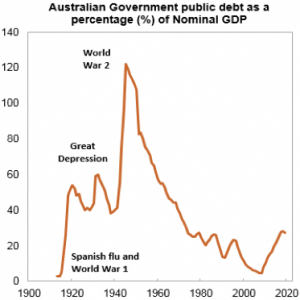 As you can see, we are not even close to historical levels. We’re not saying that we want to approach WWII levels, but you get the picture. Government Debt is generally a function of Government Spending.

Why is Government Spending important?

Government spending is important, especially now, as the impact of COVID-19 on the economy is unfolding.

Government can boost an economy by spending money in a variety of ways. How they finance the spending is one of two ways:

Why is Government Debt increasing?

During our research and discussions with clients, there has been an undertone of concern that Government Debt is getting out of control, and that the Australian Government should ‘pull its head in’.

There’s been talk about JobKeeper, the HomeBuilder Grant etc, that cost the Government a lot of money. So, we thought we would provide some background on the size of Government Debt, to help to ease any of our clients’ nerves in how to make our way back.

Is the level of Government Debt concerning?

Ex-Treasury official Steven Hamilton told the ABC, “The Government will have to increase its debt by about 40%, but issuing debt is not a problem, they could issue five times that and it still won’t be a problem”.

So how will it be paid back?

To answer this question, we need to rewind a bit:

Firstly, Australia is in a solid financial position in terms of budget discipline. As the chart below shows, Federal Government Debt, as a percentage of GDP (which is Gross Domestic Product, measuring the size of the economy), is well below that of the US and Japan – Australia has been frugal over recent decades. 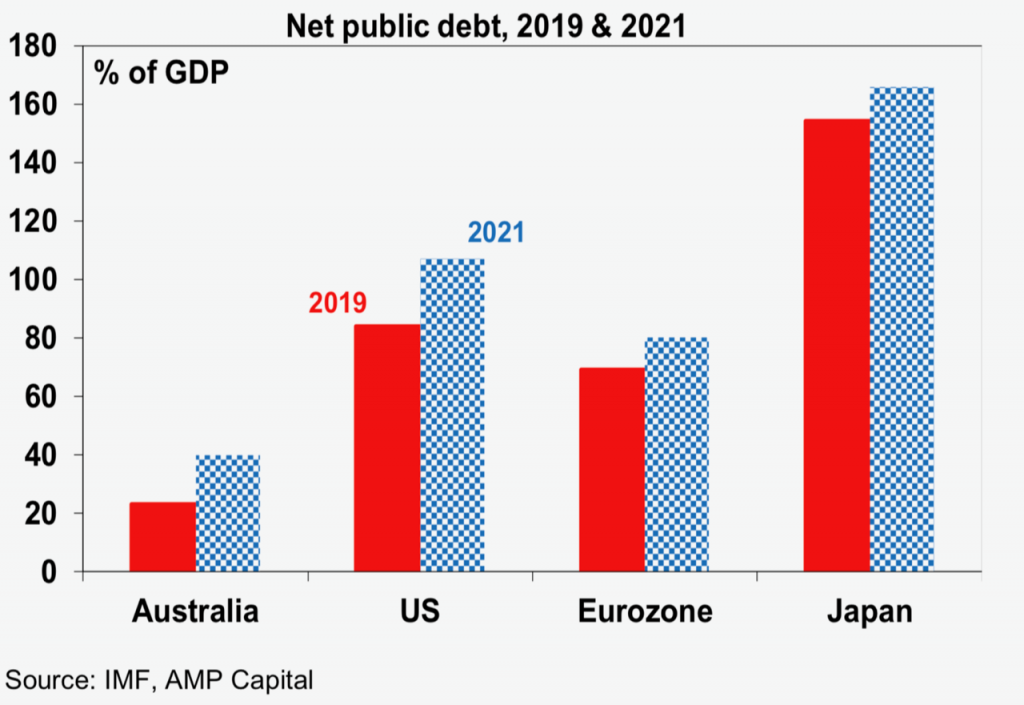 Australia’s debt is less than 40% of the value of its GDP. If we compare this metric to a business, it is like having a debt level that is a proportion of your turnover. Government Debt will go close to doubling from just over 20% in 2019 to nearly 40% in 2021, as a result of the additional forecast spending.

Compare this to other countries who have debt levels of between 80% (Europe) to 160% (Japan) of their GDP. Those countries have not gone broke yet; Australia is well behind them.

This is the chart that the Media will sell to you. 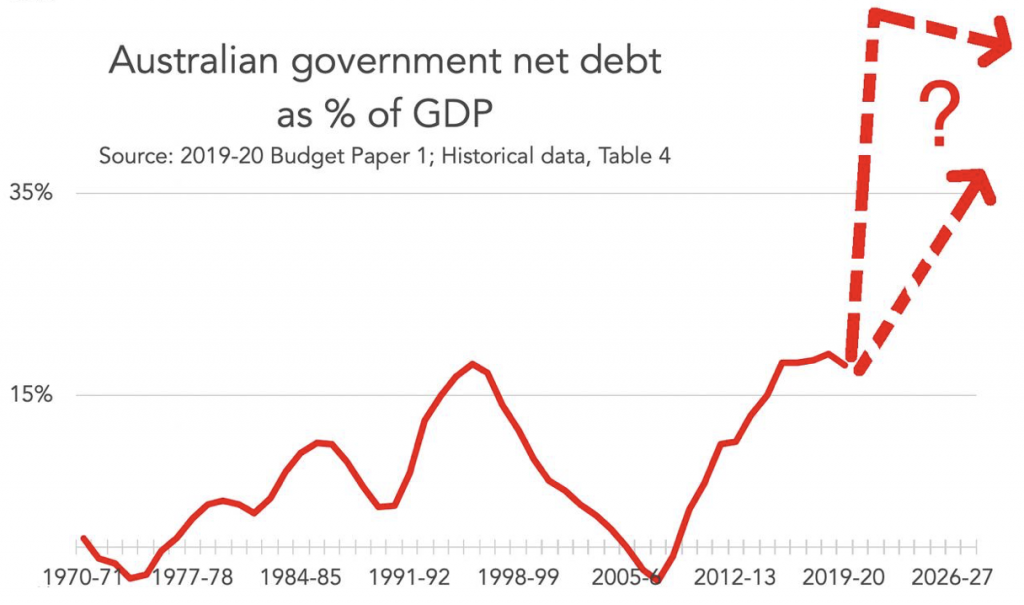 But taken in perspective it’s just amplifying the green box taken from the first chart. 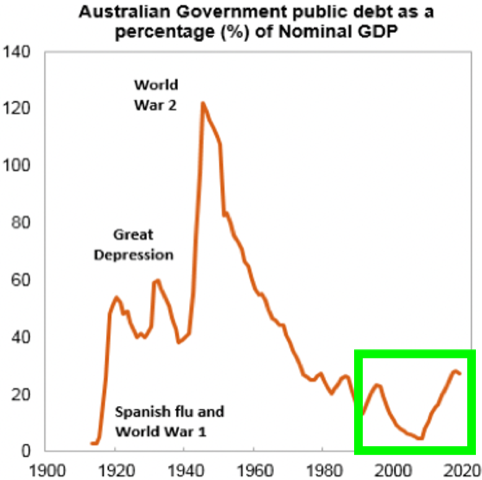 The spending in the GFC was reasonably quick, and Australia came out better than most countries. We had started to pay down debt in the last couple of years.

Now the Government is going to need to continue to spend to stimulate the economy and to make up for lost GDP in a number of sectors and industries (such as airlines, tourism, international students – you get the picture).

Secondly, the past century has shown that Australia can progressively pay down debt over time, after a crisis has passed. Following previous times of extreme hardship, Australia proved resilient and government debts were eventually reduced. Perhaps Australia isn’t simply just a ‘lucky’ country, but a ‘plucky’ country.

Where does the money come from?

Officially, the money will be raised by selling Australian Government bonds.

We need to stress that the stimulus is absolutely necessary! It’s now more important to spend in order to stop the economy from going into a lengthy recession. It is the right response to support the economy during lockdown, otherwise economic growth could fall even further, which would be harder to recover from.

You didn’t answer the question… how is the debt paid back?

What do economists think?

Most agree with the Treasurer that the best approach to getting debt back down is to grow the economy.

The Government’s wage subsidy package will “undoubtedly” prevent the unemployment rate rising as much as it would have otherwise. The size and reach of the JobKeeper payments should reduce the peak in unemployment – the economic version of ‘flattening the curve’.

The severe COVID-19 induced market correction has been unprecedented (there’s that word again!) as economies temporarily go offline to address the pandemic challenges.

The stimulus package combined with historic low rates, at near zero, will cushion the severe correction. This will enable economies, and therefore earnings, to come back online.

Equity markets have always been driven by both fear and greed. There are significant uncertainties in the current market turmoil and the dislocation in markets is the result of these uncertainties.

Is there a way out?

The human and health impact of COVID-19 has sent our fears into overdrive. Our privileged lifestyles have been impacted, and the lack of resilience is notable.

However, there will eventually be an end to the crisis, there will be a sustainable health solution, and societies and economies will recover. Get comfortable being uncomfortable for now.

Every country, and every central bank, has had to react. Every share market has been smashed. Governments are pumping record amounts of money into the economy, just so it won’t flatline. BUT, as a percentage of GDP, we’re not at unprecedented levels – not even close.

The point of THIS piece is to compare debt levels in previous crises, to let you know that Austalia is NOT insanely exposed, and has a lot of ‘wriggle room’ left.

In a dramatic economic and social crisis, there are some key historical lessons for Governments:

Nothing good results from panic. History has reinforced this point time and time again. It is our response to the crisis that is critical.

The policy response from the central banks and Governments has been swift, coordinated, innovative and a significant magnitude. Whatever it takes. This will continue.