Election promises – First Home Buyers – what does it really mean?

There is a lot of talk and speculation about what both sides of politics’ recent Housing announcements mean to assist the first homeowner and boost homeownership.

It is a pity that there is no discussion just on basic points. Three issues should be considered:

How you Buy a House

Perhaps you qualify for the First Home Buyer Deposit Scheme, which provides another $10,000 to help with your deposit. Still, most properties now available for first homeowners are outside the stamp duty exemption zone. Most first homeowners are going to have to find between $30,000 and $60,000 to get into their own home.

Most younger Australians are now having to either:
(i) Save and try to get ahead, so they stay at home longer with their parents, or they go into shared housing and put pressure on rentals further.
(ii) Rely on the Bank of Mum & Dad (if they are lucky to do that).
(iii) They end up in the rent trap.

The Coalition announcement to allow access to super, with some strings attached of course, has a lot of merit to it. As with all announcements by Government, the devil will be in the detail. We understand it will be capped up to $50,000 in total and no more than 40% of your super. Then, once you sell your house, you will have to put the percentage of the property sale proceeds back into your super as a capital gain.
In our view, this is almost a quasi shared ownership scheme, but with your super fund rather than the Government. (Labor’s proposal).

Let’s face it, most of us that were born after 1965 are going to have to wait until we are at least 60, and in many cases, it will likely be pushed out to age 65 or 67 before we are going to be able to touch our super.

So, all of the talking by the naysayers about raiding super that is set up for tomorrow in order to help out today is, in our view, crazy.

We have seen so many of these occurrences. People are forced to rely on government handouts, as they have over $200k in super, which they can not touch. So they are asset rich and cash flow poor.

This announced policy seems to be a way that a proportion of people are going to be able to avoid the rent trap.

So, unless you want to live in almost country areas or buy a one-bedroom apartment, that won’t buy you much. Suppose you are a young family. (This is what most people who want to buy their first home are, or thinking of having a family or need more space than a one-bedroom apartment). In that case, you have very little chance of being able to find something that is reasonable and in a safe and appropriate area.

The number of owner-occupiers first home buyers nationally as charted by the ABS is as per this chart: 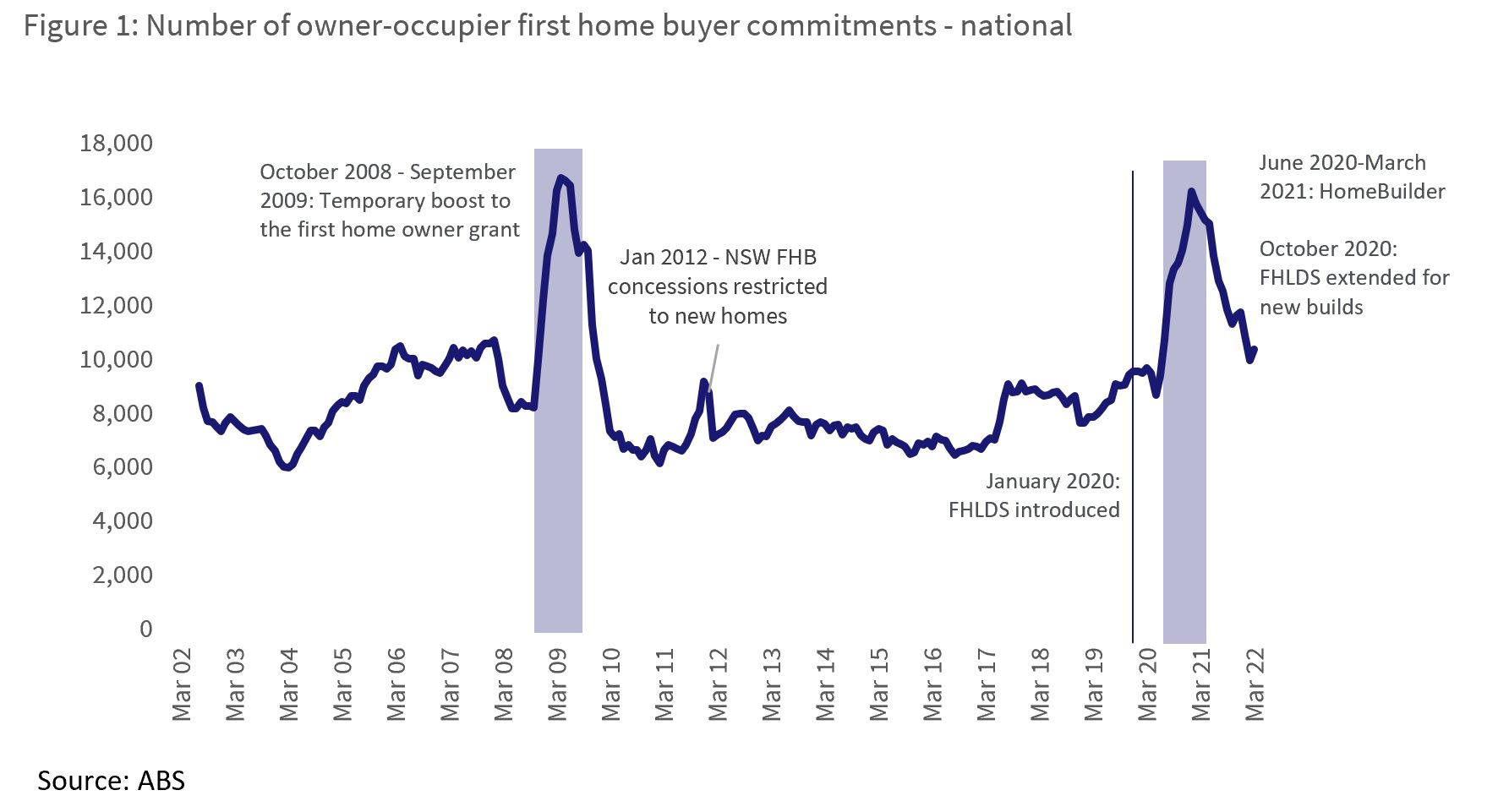 Therefore, it is difficult to see how this could affect property prices and create an overheating of the market.

The issue with the Labor proposal is that this is ownership of a property. The policies are usually written 3 and 4 years after the fact and don’t keep up with the market. (This is still better than some parties that don’t have any policy and want us all to live in State Housing.)

For example, the WA State Government Shared Ownership Scheme is only for specific properties up to around $400,000, and they only have up to 40% ownership. Then, to buy out the State, there is a process, and you effectively have to find a bank that will help you refinance and buy out the State. It is not as easy as people think. So, like other schemes, it all sounds great, but the actual implementation does nothing because it doesn’t keep pace with anything.

Furthermore, you have to be earning less than a certain amount to qualify. This is targeted at those people that are struggling to make ends meet on a day to day basis. They have very little chance of getting into a house and having any savings because of their day to day commitments with their kids or parents that they are caring for. Other circumstances give rise to the simple fact that they may qualify for the help on paper, but they will not be able to take advantage of it.

It is like the current argument about wage increases. Right now, we are the closest thing to full employment than we have had for some time. The statistics on wage growth and jobs are lagging by at least six months. We have seen wage increases having to be provided to simply keep staff, as we have too many jobs and not enough staff.

What about Property Prices?

The naysayers say that the Coalition Policy will put more upward pressure on the housing market and house prices.

If we look at a few stats below and consider:

We can see that it is only performing the way that property markets have done traditionally – which is to double in value every 7 to 10 years. It is difficult to see how this policy change will have such a boom effect.

A recent post from one of our well-known property people in WA, Mr Damian Collins, REIWA President, showed this interesting stat from the ABS Lending Indicators showing the average loan size for an owner-occupier by state. As he said:
“Another interesting statistic from the ABS Lending Indicators today is the average loan size for owner-occupiers. You can see that since March 2012;

See the chart below: 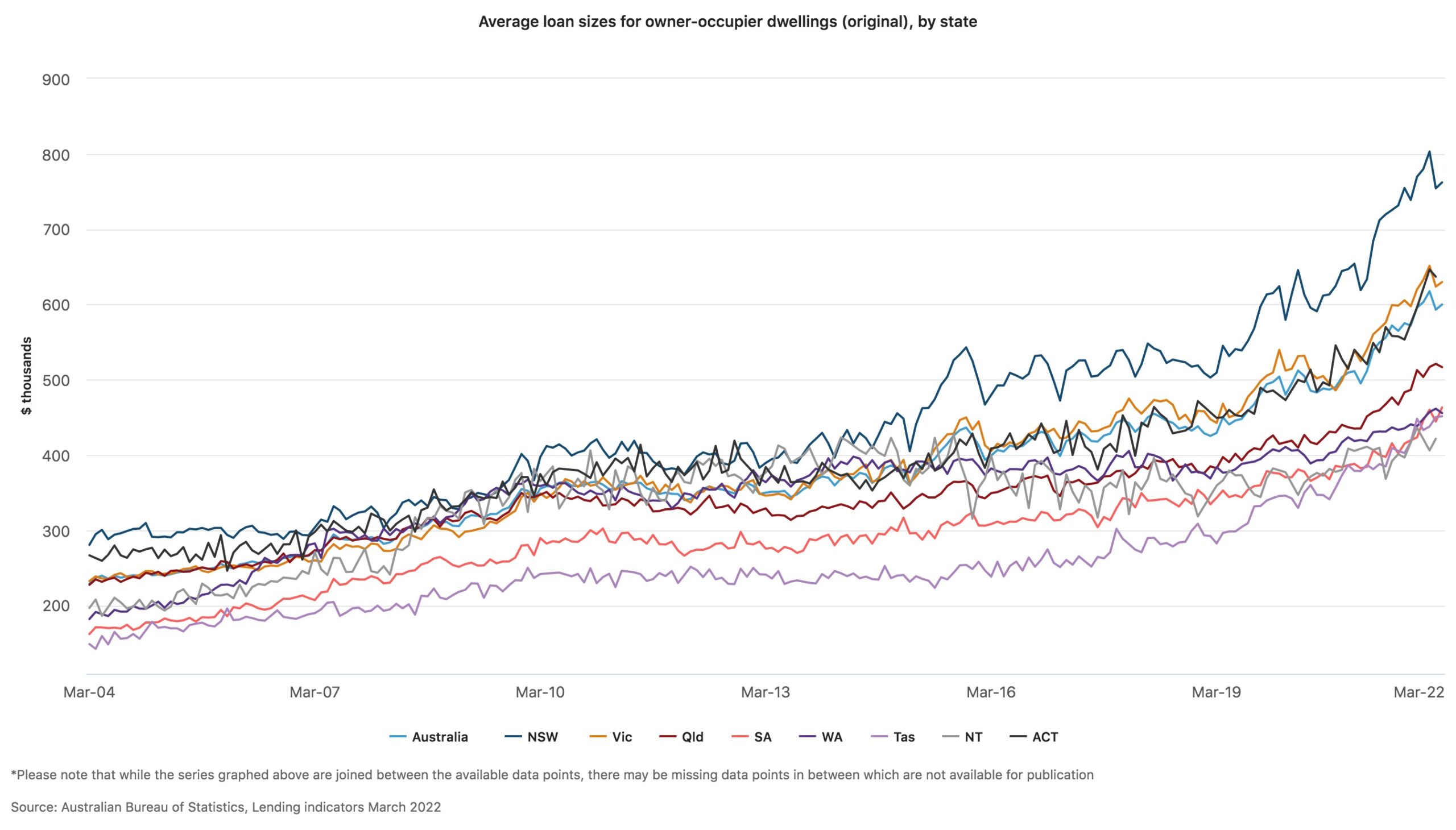 It shows that the average home loan for an owner-occupier has grown significantly in the last 20 years.

The ABS stats also for property index shows that if you bought a property in Dec 2011, Sydney and Hobart are the only two that are double your money. Darwin is worth less than it was in 2011, and Perth has only just crept up to make about 10%. This is all coming off a very low base post the GFC as well. 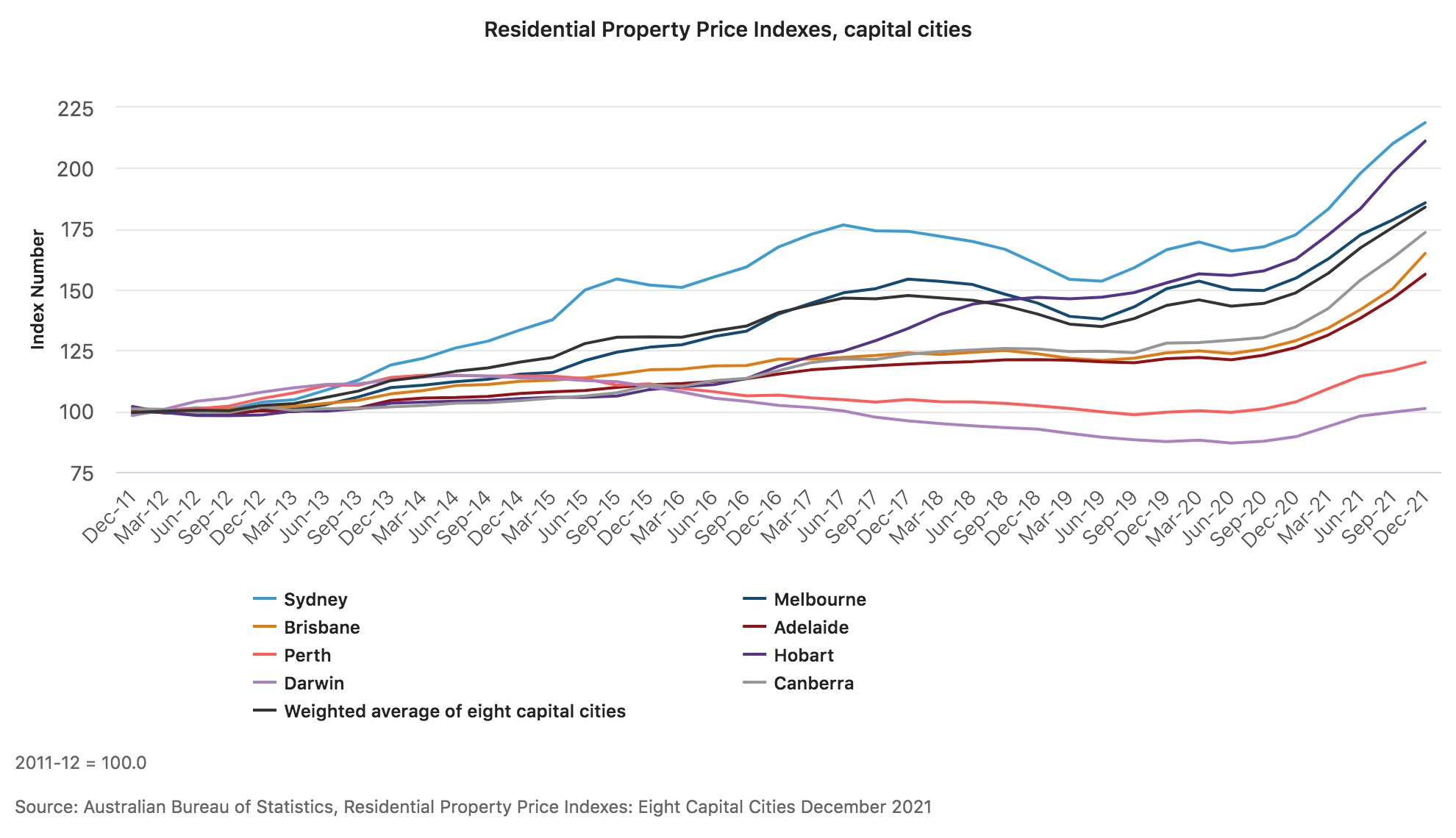 A few more facts about Super:

a) From 1 July 2022, the superannuation guarantee goes up by another 0.5% to grow to 10.5% of your salary. That means that you get additional funds to help you in retirement. Some employers may not be able to provide a bonus or wage increase, as they have to fund the increase in super regardless.

b) You can’t access your super generally unless you are totally and permanently disabled, pass away, meet the ages (as set out below), or meet another condition of release.

c) You can now put in a downsizer contribution so that if you want to sell later in life to cash out some of the funds from your house, you can put more into super at that time. This is good for many people, but it does not help those getting out there as a start.

If you need any assistance with your home loan or superannuation then we are always here to help!

The difference between the policies is here:
https://www.abc.net.au/news/2022-05-17/what-are-the-two-major-parties-promising-for-first-home-buyers/101070144?utm_campaign=abc_news_web&utm_content=link&utm_medium=content_shared&utm_source=abc_news_web