Russia v Ukraine crisis and the impact on markets

With the invasion of Ukraine, we wanted to give you a brief update on the impact on the markets and implications for investors.

The last few days have seen a sharp escalation in the situation between Russia and Ukraine, with Russia recognising the independence of two regions in the Donbas area of eastern Ukraine, that have been controlled by Russian separatists since 2014, and ordering Russian “peacekeeping” troops into the regions.

As a result, share markets have fallen further, with US and global shares falling just below their January lows and Australian shares under pressure too. Bond yields have also fallen due to safe haven demand and oil prices have pushed to new post 2014 highs.

Although it has said it won’t, there is also the risk Russia cuts off its supply of gas to Europe where prices are already very high, with a potential flow on to oil demand at a time when conflict may threaten supply.

In short, investors are worried about a stagflation shock to Europe and, to a lesser degree, the global economy generally.

With Russian troops moving into the Donbas region of Ukraine, investment markets will worry that they will move on to a wider invasion of Ukraine, until signs appear to the contrary.

So, we could still see share markets fall further and oil prices rise further in the short term.

Is concern over a larger market pullback warranted?

Financial markets tend to recover quickly from geopolitical events. The most obvious historical comparison, which was also the most significant in terms of market impact, is the Iraqi invasion of Kuwait in 1990.

The S&P500 fell 1.1% on the day, as the probability had been discounted by markets. The benchmark US equity index would go on to decline by 16.9% over the course of 10 weeks, taking just over six months to recover.

Historically, the main driver of whether we see a correction (a fall of, say, 10% to 15%) or even a mild bear market (with, say, a 20% decline that turns around relatively quickly) as opposed to a major bear market, is whether there is a recession in the United States.

Most economists view that recession risks look relatively low, at least for the next 12 to 18 months. Strong household and corporate balance sheets leave us positive on the ability of the US and global cycle to deliver significantly above-trend economic growth in 2022.

Although the Fed is likely to begin lifting interest rates soon, we believe it will take until at least the second half of next year for monetary policy to transition from being less stimulative to having a contractionary impact on the economy.

Key watchpoints amid the crisis

Russell Investments are reasonably confident in the medium-term cycle outlook, and notes that valuation have improved slightly as markets correct.

This makes sentiment the main watchpoint. Their composite sentiment index tracks technical, survey and positioning indicators to gauge whether investors are excessively optimistic or pessimistic.

Sentiment has become oversold as markets have declined, although they believe it is not yet at a level of panic. 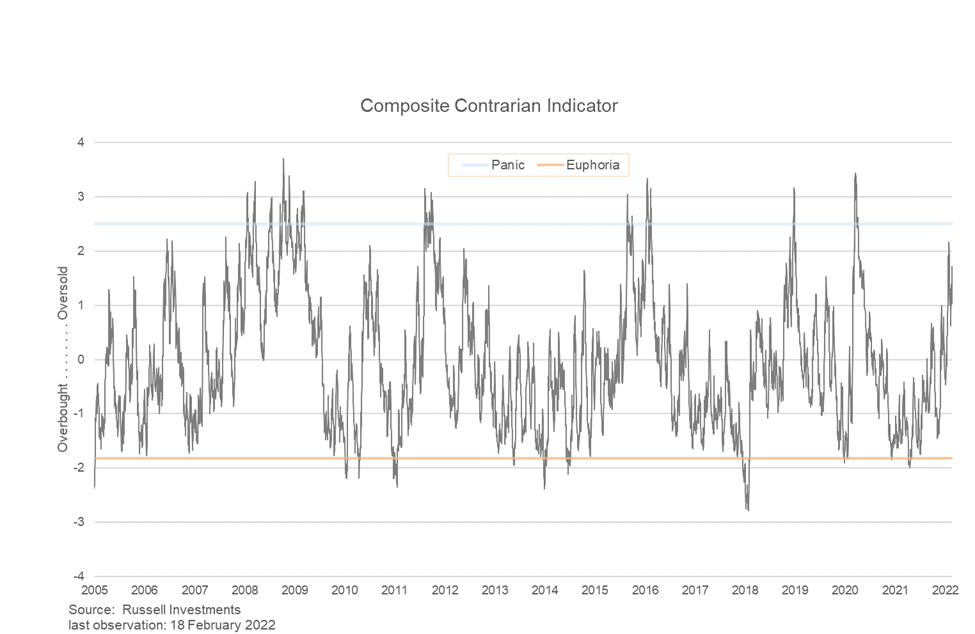 In conclusion, what does this mean for investors?

We will monitor events in Ukraine closely, but with an eye on sentiment indicators to judge whether investor psychology has reached an unsustainable level of panic that requires action.

From the point of sensible long-term investing, the following points are always worth bearing in mind in times of investment markets uncertainty like the present:

Contact us now and we can assist you with your investments.